Ministers in the UK have tightened safeguards around fracking and given the green light to companies to start fracking throughout the country. This green light includes the fracking of national parks in what they have deemed 'exceptional circumstances', although ministers have retained the right to veto these plans if called for. From Monday, the Government will invite different shale gas firms to bid for onshore gas and oil licenses for the first time in 6 years. So, will fracking really secure our energy future? 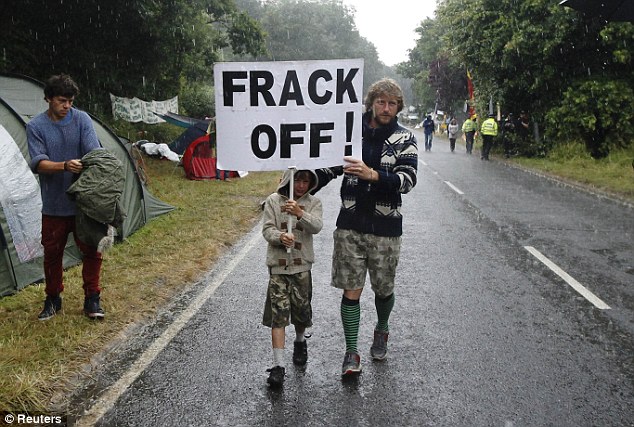 Around half of the UK is currently up for shale gas 'exploration' - that's a lot of land to bid on, and a hell of a paycheck for the UK. Many people in Government are talking about how fracking can play a big part in securing our energy future; something which has been a sore point for quite some time now. Ministers have not only given the green light, they've also outlined rules on whether or not drilling can take place in places like national parks, areas of 'outstanding national beauty' and world heritage sites. The rules state that drilling is allowed in these sites, but the Government have retained the right to veto plans - presumably because they're expecting people to react badly and have a lot of public fallout to deal with. This comes just weeks after environmental campaigners and academics called for an outright ban on drilling in these areas.

In its defence, the UK Government aren't going to let firms just drill anywhere after a successful bid - at least not without submitting a "comprehensive and detailed" environmental statement if they want to drill near protected countryside. What these statements are to contain is a mystery, although the Government have stated that energy companies should make it clear that they understand the 'sensitivities' involved in fracking on people's doorsteps.

The competition for licences is likely to attract significant interest from energy companies keen to explore Britain's new-found shale reserves, particularly in the Bowland basin of the north-west, a central belt of Scotland and the Weald in the south-east. It is the first time the government has offered up areas of the UK for onshore exploration since experts confirmed the scale of the UK's shale resources and protests erupted in places from Blackpool to Balcombe about the potential for environmental damage.

The 'fracking journey' is a lot longer than simply obtaining a license for a given site however. Upon securing a license, the firms will then need to seek planning consent, approval from the Environment agency and a sign off from the health and safety executive. It sounds like the Government are trying to be as throrough as possible when it comes to preserving public interest but you can't  help but think that these sites will be going to the highest bidder, and that these hoops are merely smokescreens to make the UK seem more selective about who it allows to drill for shale gas.

There is a planning watchdog who are usually charged with dealing with appeals to carry out projects like this in protected areas. It hasn't yet been explained why they've been taken out of the mix and Eric Pickles, the communities secretary, has been put in charge of approving or rejecting them. Matthew Hancock, now the Tory energy minister after the cabinet reshuffle, said over the weekend that he wanted to speed things up so that companies could start drilling within 6 months of submitting their applications - however he did also comment that he was sure the measures that had been put in place by ministers would "protect Britain's great national parks and outstanding landscapes".

It seems like there's some unrest on the Tory back bench about fracking in rural constituencies. Will their measures regarding fracking in these areas be enough to placate the local residents? Some still argue that the Government should have taken these areas off the menu altogether. Green campaigners in particular are very concerned about the effect fracking could have on local drinking water and the general environment. A leading spokesperson said,

"If this still leaves the door open to fracking in national parks and areas of outstanding natural beauty, it completely undermines the protective status that those areas have been given and renders it meaningless. Many campaigners have campaigned for decades to get national park status, and they are given for a reason. The idea that they could be offered up to the fracking firms is a scandal."

What right do shale gas companies have to drill on land which has otherwise been protected for decades? It's one of the many questions the Government will face over the coming months, and we're bound to see countless protests at drilling sites as their efforts to smooth fracking over in the media fail.

Eco Stores Direct are here to bring you the very latest in energy news, views and opinions from across the UK. They are also suppliers of energy efficient electric heating solutions and are constantly assessing the market for the best products and the latest ground-breaking technology which they think will make a real difference to their customer's homes. Eco Stores Direct are devoted to helping you reduce your carbon footprint and bring down your energy bills and they work hard to raise awareness of energy efficient products that can make all the difference. For more information on their range of far infrared wall panel heaters, or affordable designer electric radiators, call one of their friendly team today on 0330 300 4444 for a free assessment.