If there’s one thing that comes to mind when you see the Ecostrad iQ Glass, it’s how sleek and modern this electric heater looks. With its black glass front, its touchscreen interface and its WiFi capabilities, the iQ Glass is a truly contemporary take on heating. However, there’s more to an electric heater than its appearance, even if this one is particularly stylish. I wanted to put the iQ Glass to the test, to find out which features work best and get right down to brass tacks so I can share the results with you in this review.

Before we get started, I thought it might be worth mentioning a few things that came in handy when I was installing and using the iQ Glass:

I’d say the most essential item in this list is the manual as I found it best to keep this to hand throughout the installation process. I did try to start without the manual, hoping I could get by on my basic knowledge of technology and heating appliances, but I found myself needing to take a look at the manual pretty much straight away. The great thing is, with a step-by-step guide on every aspect of installation and use, including app navigation, the manual is easy to follow and understand, but that’s only the beginning. There are many more features the iQ Glass has to offer so, without further ado, let’s dive right in. 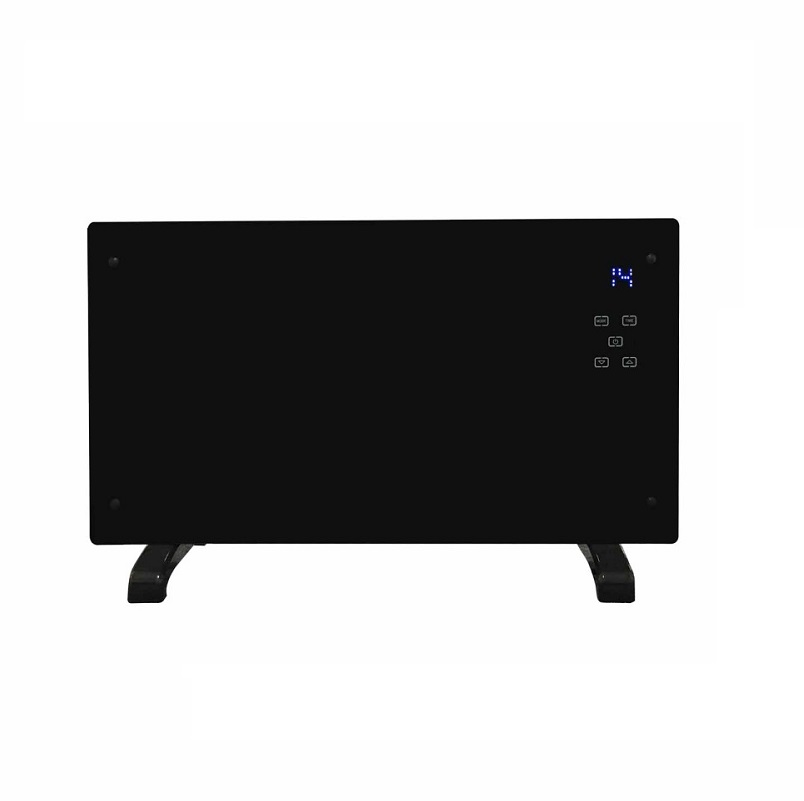 Manoeuvrability: how portable is the iQ Glass and is it easy to install?

One of the first things I looked at is the manoeuvrability of the iQ Glass. I wanted to see for myself just how lightweight this electric heater was. For somebody standing at 5’4” with not much upper body strength I was able to lift the iQ Glass with no problem and move it into position. Once I had decided on the location, I then had two options: was I going to wall-mount the heater or have it free-standing? I opted for free-standing (since running around the office drilling holes into the wall is frowned upon, apparently) but the mounted installation has been demonstrated to me and it’s very straightforward.

This is a simple enough DIY task because a template is supplied to help you install the bracket to the wall. Once the bracket has been fitted you have the freedom of slotting the heater on and off as you please, so you can have the iQ Glass attached to the wall one day and free-standing the next, just make sure the heater is turned off if you do decide to switch between installation options. I really liked the addition of the child lock on the bracket, which secures the heater in place to prevent it being moved. It’s a small detail I probably wouldn’t have thought of, but as soon as I saw it, I realised it’s one of those features that would give parents that much more peace of mind when using the appliance.

As mentioned before, I opted for the more portable option and it couldn’t have been easier to set up. All I had to do was attach the feet to the bottom of the iQ Glass. With the four screws provided and my own Philips head screwdriver in hand, I simply screwed the feet on, turned the heater the right way up and plugged it in at the wall. It was good to go after that.

On-demand heating: is the iQ Glass quick to heat?

We’ve all been there, keeping a jumper or jacket on whilst waiting for the heating to kick in. That wasn’t the case with the iQ Glass though, as it did in fact deliver on-demand warmth. I was pleasantly surprised when I set the temperature, only to find that within minutes I was feeling the benefit. After about fifteen minutes, the whole office knew that the iQ Glass was switched on, because the room had reached a toasty level of warmth, which proved to me how quickly this heater can warm up a space.

The iQ Glass comes with three different heating modes: high power, low power and anti-frost to give you the flexibility over your heating. The manual informed me that low power mode only uses a single 1kW element to reach a set temperature, which is a great feature if you’re looking to cut down your heating bills, whereas high power mode uses both elements with twice the output. These modes can be easily changed in the app or via the mode button on the heater itself. I kept mine on high just so I could test the full power of the iQ Glass, and I was more than satisfied with the warmth it could deliver. It warmed up faster than I thought, reaching the set temperature of 22o C in no time, however, I can see why it acts better as a supplementary heating source as the office started to lose heat whenever somebody opened the door. I would suggest using this convection heater in a room that isn’t used as often as others, such as a guest bedroom or home office. Or, if you need a solution that won’t be as prone to heat loss, you could always opt for an electric radiator like the Haverland RC Wave, which provides a more lasting warmth.

WiFi Capabilities: just how smart is this smart electric heater?

The iQ Glass is one of our most intuitive panel heaters yet and with its sophisticated heating technology, WiFi control and Alexa compatibility, I can see why. This was the main reason I couldn’t wait to test the iQ Glass out for myself and I have to say, I was rather impressed. 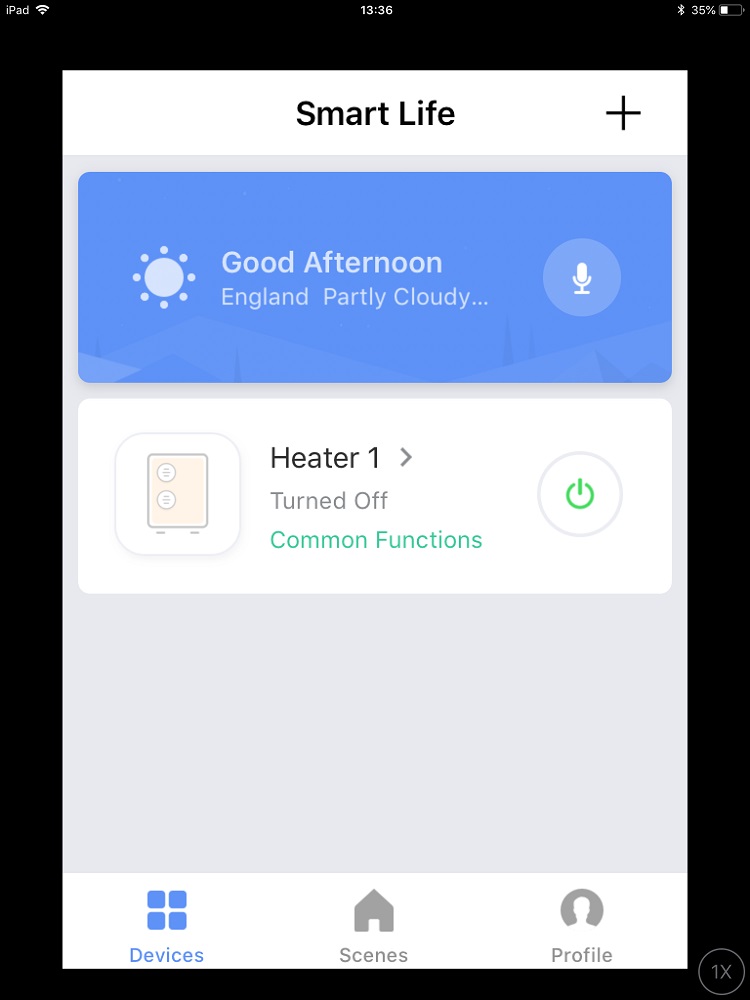 Downloading and connecting to the app

The first thing you need is a smartphone or tablet. I opted for a smartphone, and soon as I was registered and logged in, I was given the opportunity to personalise the app by naming the heater. I went for the very impersonal and not at all creative name of “iQ Glass” which you can opt for too unless you want to get a little more fun and imaginative with it. You can also share control of the heater with family members so that more than one of you has the power to adjust settings via the app.

The only snag I found was trying to connect to the heater. The WiFi signal was showing on the iQ Glass, I had a good connection on my smartphone, and I had placed it close to the heater, but it still took a good two minutes to pair up. I will say, however, as soon as it did connect there were no other issues. It’s worth mentioning that our office is situated in a rural area with sometimes patchy signal so with a better internet connection it may not take as long to partner your phone with the iQ Glass.

The app itself has so many intuitive features that I was spoilt for choice. Even the little touches to it felt considered, such as the weather forecast at the top of the screen, which meant I could adapt my heating according to any temperature changes outdoors.

One of my favourite features was the timer, because it allowed me to set heat intervals to the minute. As a test, I set the timer to switch the iQ Glass on and then off again ten minutes later and sure enough, the appliance delivered ten minutes of effective, on-demand warmth before beeping to let me know it was turning off. I also had notifications switched on which lit up my phone with a message as soon as the iQ Glass turned off so I didn’t have to get up to find out. I personally found the app easy to use and very responsive and I’m sure once you get the hang of it, you’ll be swiping through control options in no time.

With the app you can also set customisable ‘scenarios’ for intelligent heating. This basically means you can set an automatic schedule to perform different actions for one of your heaters or for multiple heaters at a time. For instance, you can program all of your heaters to switch off at the same time or create a scenario that works in conjunction with the high-power heating mode, ensuring all of your heaters turn on at the highest temperature whenever you need them to. Of course, you can also program a 24/7 schedule for your daily and weekly routines to fit around your lifestyle, something I found intuitive to create via the app, which is why the WiFi capabilities are so integral to this appliance.

Manual control: is the touchscreen interface easy to use? 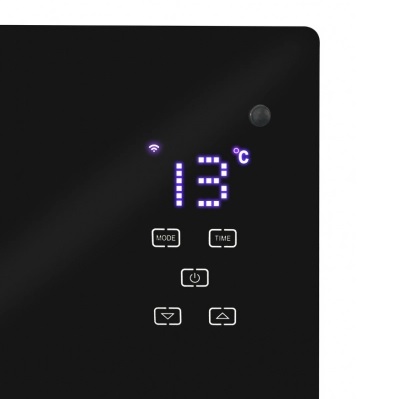 The iQ Glass has a touchscreen interface, which is clear, sleek and stylish. As soon as you turn the heater on, it displays the current temperature in the room alongside the WiFi icon. I was a little unsure on how to initiate the heating itself, so I had to consult the manual again and follow the instructions. This was straightforward and I was able to navigate through the manual controls easily enough, however, I did discover that the touchscreen buttons weren’t as responsive as I was expecting. I couldn’t rapidly tap the up and down arrows to change the temperature, meaning it was certainly slower than the app, plus, with every button press there came a beep which I imagine could get a little tedious for some. If you feel like you would prefer a heater that’s easier to interact with, the Ecostrad iQ Plus may be the better option as its buttons are tactile and responsive and it offers programming both using the app and its manual interface.

Although the touchscreen is easy to use, there is less flexibility with manual control. The smallest increment for the timer is one hour and you can’t create a 24/7 heating schedule using the in-built interface. If you prefer something a little more basic, the manual controls will likely be enough for your needs, but keep in mind this is a smart electric heater designed for people who want the majority of their heating control to come through the app.

Overall, the iQ Glass panel heater did everything I wanted and more, proving it really did have the smarts to provide convenient and intuitive heating. I wouldn’t hesitate to recommend it to anyone who needs a quick source of heat that’s also easy to control, though it is best suited to spaces you use less often or for shorter periods of time. Guest rooms and conservatories, for example, make prime candidates for the iQ Glass’ quick warmth, and when paired with its app control capability, you can ensure your spaces are toasty and warm whenever you come to use them. While you could use this heater without its smart control, you’ll be missing out on a whole trove of swish features that make interacting with the iQ Glass a breeze, and what’s more, the Smart Life app is also compatible with a whole range of other appliances so you could potentially set up a fully automated home system.