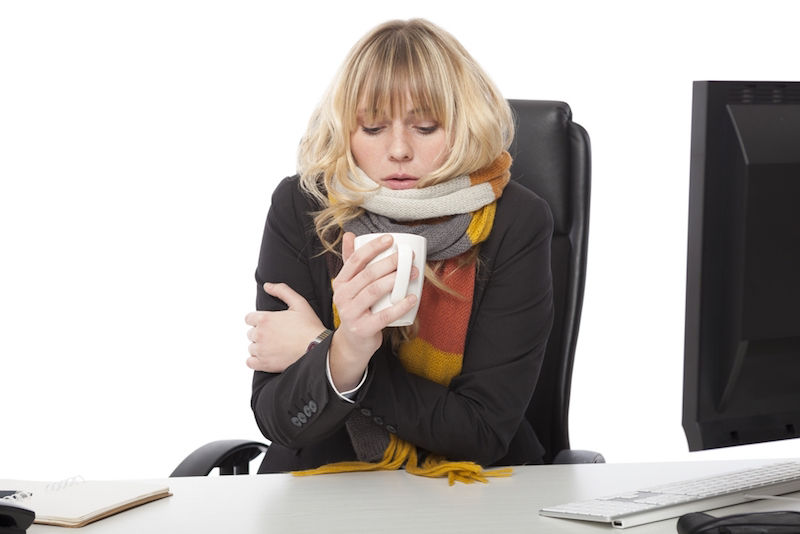 A lot of stereotypes get debunked the second a scientist walks into the room. However, that doesn’t mean that some of them don’t turn out to be true in the end - including this one.

The age-old assumption that women feel the cold more than men actually carries a lot of weight: research published in medical journal The Lancet in 1998 reported that women’s hands are 2.8 degrees colder on average than their male counterparts’.

Office Heating – the battle of the sexes

Although it only sounds like a small amount, this difference can have an impact on peoples’ everyday lives, especially in the workplace. One study by Dutch researchers, for instance, found that women are at a disadvantage in the office as the temperature tends to be set to a standard in which men feel most comfortable. This goes deeper than the proliferation of men in management positions in the work place. Research has shown that even the air conditioning units themselves may have been designed predominantly to suit male needs.

But what makes the heating needs of women differ so widely from the needs of men? Well it all comes down to a variety of biological factors.

A number of things could contribute towards women feeling the cold more than men, all of which link into evolutionary development. One of the main contributing factors is fat.

Whereas men are more likely to have bigger muscles, women tend to have a higher fat ratio. One of the results of this is that men are able to cool down faster, as muscles are better at losing heat, whereas women are able to stay warm for longer, as fat is better at retaining it.

However, when a person gets cold they reduce the amount of blood flowing to the skin in order to conserve heat. As women tend to have 20 to 25% body fat compared to around 15% for men, their skin temperature drops lower as their blood moves beneath a more densely distributed layer of fat.

In other words, when a woman says she’s cold – she’s right, but it’s mostly because of the temperature of her skin.

Other potential factors may include women being more sensitive to peripheral cold stimulus, oestrogen raising their sensitivity, and women generally being smaller than men.

However, it’s not all doom and gloom for women: evolution has helped them out too, although it may not be as readily apparent in a workplace scenario.

Despite being more likely to have cold hands and feet as a result of the factors mentioned above, women also tend to have a slightly higher core body temperature than men.

This comes down to their bodies shutting off the flow of blood to their skin in order to maintain their temperature at a higher level.

It may only be around 0.4 degrees more than their male counterparts, but every little helps.

And if all else fails – why not kit your office out with efficient, fully controllable electric radiators? With individual thermostats which can be adjusted to create ideal temperature zones in every room, this might just be the best way to keep everyone in the workplace happy – men and women alike.