Making important decisions about your bathroom renovation is never simple, especially when it seems like there’s a new product coming to market every week. From baths to sinks, to towels and tiles, there are a lot of important decisions to be made about your future bathroom. But one of the most crucial ones is too often the most overlooked: towel rails.

The popularity of heated towel rails began to rise around the 80s, when ugly radiators of the 1940s onwards were falling out of fashion in favour of more modern designs. Around the 1980s, designers were beginning to see that the efficiency of electric radiators was more suitable for heating rooms rather than warming towels through. In this new demand for design, we saw the rise of heated towel rails, a dedicated design which has been featured in bathrooms across the globe ever since. Nowadays, the biggest problem with towel rails is pardonable: how do you choose the best electric towel rail?

Well, here are the main questions you should ask yourself, before making the big decision.

Towel rails come in two versions: electric or connected to your central heating. But what’s the difference? Central heating rails warm up along with every other radiator in the house when the boiler kicks in and generally don’t offer much in the way of control. In contrast, electric models run entirely independently so they give you the option to run your bathroom heating as often or as little as you need. They’re particularly useful in summer because you don’t have to heat your whole home just to keep your towels toasty. If you want your towel rail to act like just another radiator in your system, central heating may suit you just fine; but if you’re looking for something that’s more versatile and adaptable, electric is more likely to fit the bill. 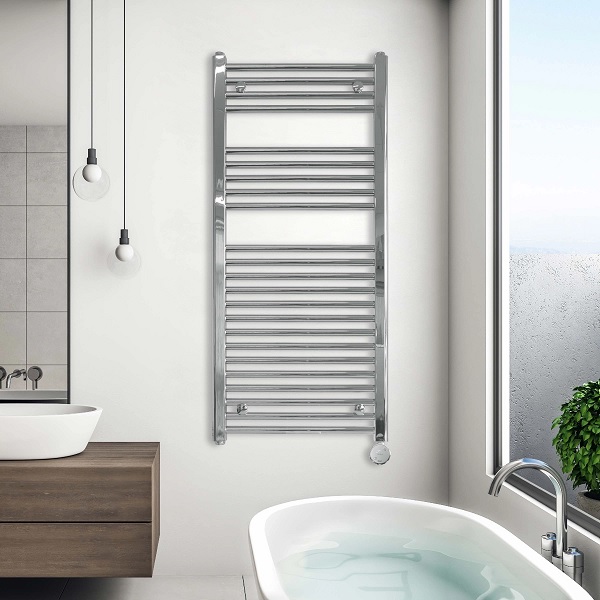 Though a towel rail can be used to heat a bathroom, some may only want theirs for drying purposes, so it’s important to know whether you fall into the former or latter of those two camps. If you need to heat the whole room, always make sure that the output of the towel rail is going to cope with your room size. In the case of a central heating model, you’re going to want to look at its BTU value, whereas with an electric model, you’ll need to look at the wattage. To make it easy for you to choose the right product, all of our electric towel rails give you a maximum ‘heats up to’ area so you can match it to your room dimensions. An all-in-one room and towel drying solution can be the better, more practical choice for smaller bathrooms that need to maximise the space available. However, if you have a larger bathroom, there’s nothing stopping you from having a radiator for room heating and a separate rail to keep your fluffy Egyptian cotton towel set in circulation. Should you just want a towel rail for drying, electric models can be the most convenient to use, and in this instance there’s nothing stopping you from choosing a lower wattage product.

In keeping with the times, many towel rails now come with a range of sophisticated controls for more advanced management over your heating. Unlike central heating towel rails, electric towel rails now have built-in timers and accurate thermostats. This means you can have your towels warm for the morning shower before work or in time for your long-awaited bath without having to worry about wasting energy. Towel rails with precision thermostats allow for better efficiency when it comes to heating your home and drying your towels as they keep the heater at a consistent and accurate temperature in accordance with your preferences. A heated towel rail such as the Ecostrad Fina-E Blue take convenient control one step further by featuring an MOA Blue heating element which allows you to manage your heating via a compatible app through Bluetooth. Adjust your heating and set up a schedule to suit your routine every day of the week, all from your smartphone. Compared to traditional radiators, this is a much more advanced way to help you improve energy efficiency and reduce running costs, which is one of the many reasons you should upgrade to a modern, electric towel rail.

Question 4: what style of towel rail? 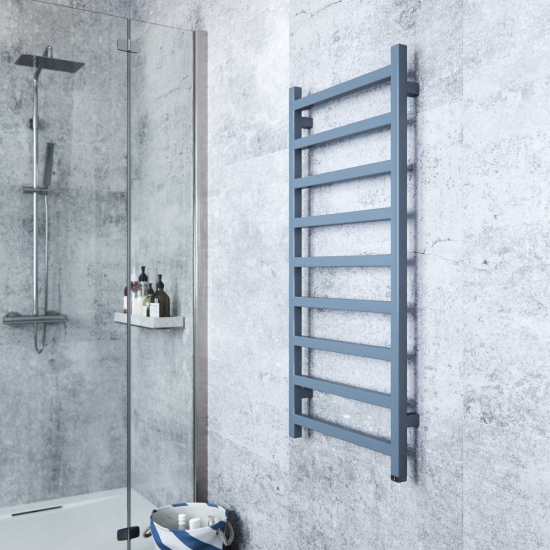 As for styles, towel rails come in a wide range, some traditional and others spectacular. For smaller bathrooms, compact vertical towel rails will fit a couple of fluffy towels and keep them warm. For those with larger bathrooms, there is a huge choice of large, designer electric towel rails. A stark towel rail can really set off a room, especially in bathrooms with otherwise traditional features, proving a fantastic counterpoint. A sly tip to remember is that white towel heaters radiate slightly more heat than chrome one, all due to the reflective properties of chrome. However, in most cases, your ultimate colour choice will be influenced largely by your décor rather than anything else. Another tip: try to avoid putting dark towel rail in small rooms, as it creates a cluttered environment.

Choose the best electric towel rail today and start designing the bathroom of your dreams with Electric Radiators Direct!