There’s a reason towel rails are becoming popular in British bathrooms. What could be better than stepping out of the shower and straight into a warm, cosy towel? If that wasn't enough, electric towel rails also double up as independent bathroom heaters, alleviating the need to leave the comfort of your shower and stand in an uninvitingly chilly room – a huge advantage, especially during the winter months! There's an extensive selection of electric towel rails available on the market. You can choose from different sizes, styles, (both contemporary and traditional) and price ranges. Whatever size bathroom you may have, there's an ideal electric towel rail out there for you...

There is an increasing global commitment to reduce our energy footprint while simultaneously increasing energy efficiency and reducing costs. Whether you have warm towels or not, here's our tips for energy-efficient electric towel rail use...

Although less common than central heating towel rails, electric towel rails have many advantages over their plumbed counterparts. Regardless of the month, it is always nice to get out of the shower and into a warm room. For this reason, many people want their towel rails heated all year, even when the rest of the house does not require the warmth. In a conventional central heating system, turning on your towel rail will automatically engage the rest of your heating, which is an inefficient and wasteful use of heat during the summer months. In this sense, electric towel rails are advantageous as they function independently from other heating systems in your home, allowing more control over your heating and reducing energy waste. To improve efficiency further, consider installing a thermostatic controller to limit the temperature or time your electric towel rail is active. 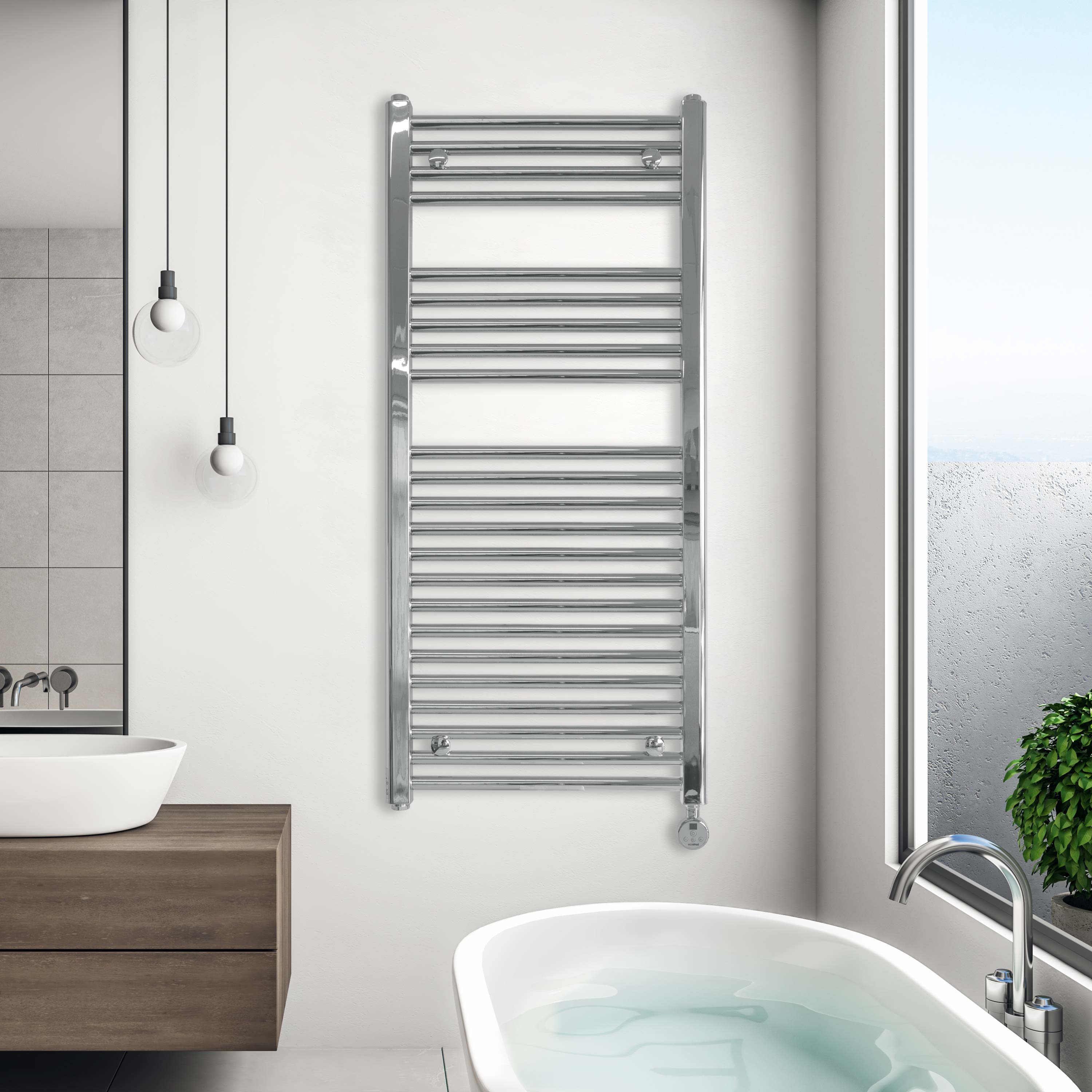 An essential feature for improving energy efficiency, both central heating and electric towel rails can be fitted with thermostats. Thermostats work to maintain a specific room temperature by turning the system on and off periodically. However, the varying precision of thermostats has the ability to alter the efficiency of your heating system. Central heating systems are controlled by a single thermostat which can give inaccurate regardings of the temperature. In fact, bathroom temperatures can vary by as much as three degrees using a plmbed towel rail because the temperature readings are taken from a central location instead of from inside the bathroom itself.

This differs from electric towel rails, which can be purchased and fitted with their own thermostats, giving far more accurate temperature readings from inside the bathroom. This way, the thermostat can maintain the temperature of your bathroom with greater precision. The majority of our electric products are fitted with precision thermostats. The Ecostrad Fina-E Thermostatic electric towel comes fitted with an easy-to-use thermostat and room temperature sensor, allowing you to set the temperature level to your liking. It also has a 1-5 hour timer so if you only want to dry your towels, you can programme the towel rail to provide a short burst of heat, that way you won’t be wasting energy on heating the entire room when it’s not needed. This will ultimately help to decrease your energy footprint and reduce electricity bills even further! 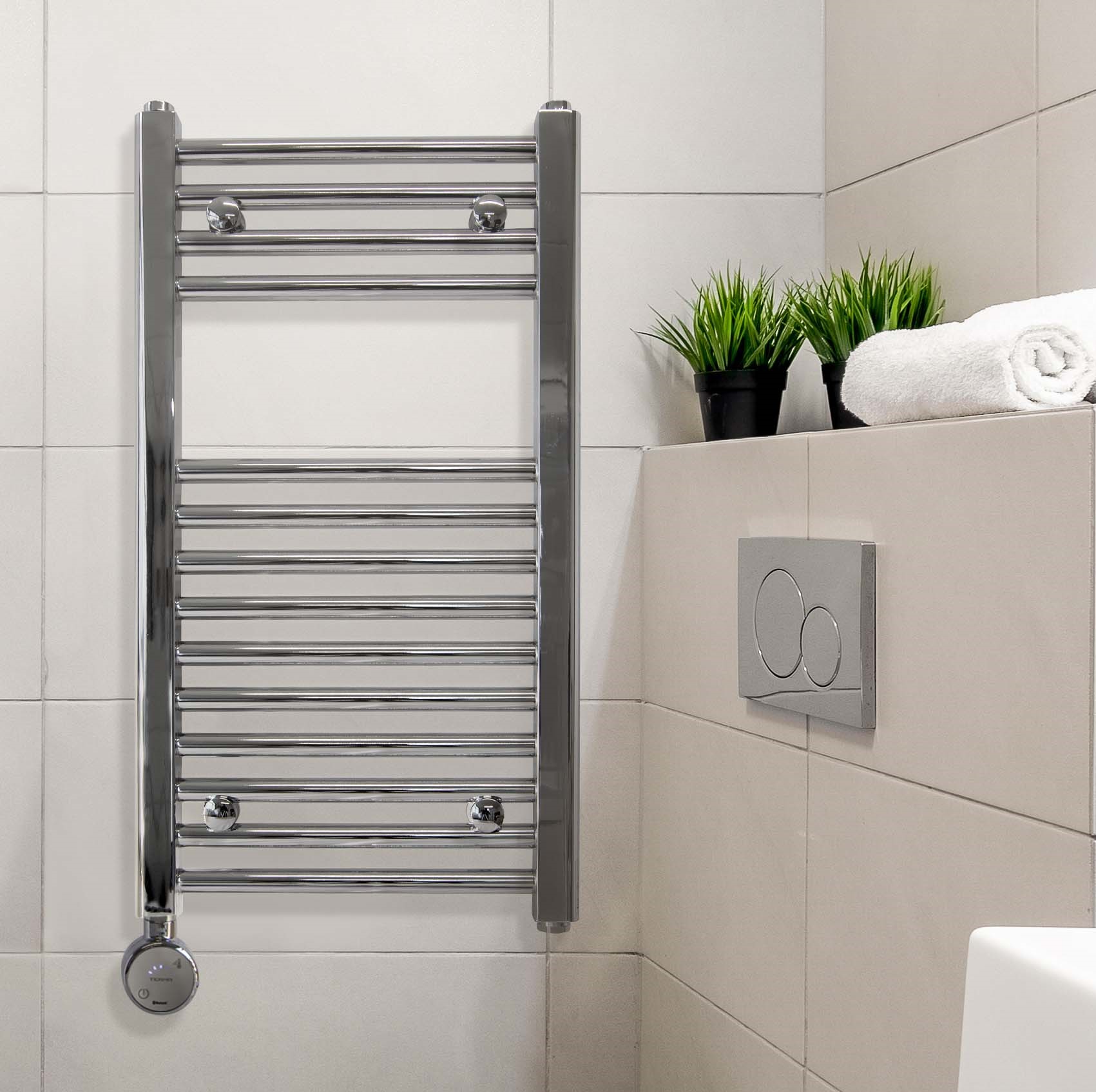 For a lot of people, heating a bathroom throughout the day is as harsh on the budget as it is on the environment. Especially when you consider bathrooms are most frequently used in mornings and evenings. For even greater control, in addition to using a thermostat, you may wish to consider a smart electric towel rail such as the Ecostrad Fina-E Blue smart electric towel rail. This towel rail gives you advanced control over your heating using Bluetooth so you can program it in a number of different ways such as setting up a heating schedule. Through a 24/7 programming feature, you can arrange a customisable heating timetable to fit your lifestyle, and only heat your home when you wish, meaning no energy is being wasted heating rooms when they are not in use. You can decide exactly when you want your electric towel rail to be on and for how long – just like a fully-fledged electric radiator. The great thing about smart electric towel rails like the Fina-E Blue is that this can all be done from your smartphone. With five different heat levels and a two-hour timer, you are fully in control of your bathroom heating, and all it takes to adjust your settings is a swipe and tap of a screen.

What if my bathroom already has a towel rail?

If you already have a towel rail in your bathroom that's not fitted with a thermostat or programmable timer, such as our traditional towel rails, you may be using more energy than is necessary. However, it is still possible to decrease the amount of energy used by your rail heater. Consider the Wall Mounted Towel Rail Controller, which is compatible with all standard electric towel rails. This device offers basic control over heating at a small cost, meaning towel rails in seldom-used rooms do not have to be constantly on, eliminating the need to install new towel rails. For even greater efficiency, simply use the Eco timer button, to automatically switch off your towel rail after two hours.

Whether you already have an electric towel rail, or are interested in installing one, there are measures you can take to reduce the footprint of your product or to ensure that the product you purchase is as efficient as it can be. Not only are basic electric towel rails more efficient than central heating towel rails, due to the lack of fuel being burnt, they heat up faster too.

As awareness of carbon footprints grows in the UK, investment into green energy is increasing. Currently, electricity is generated by a combination of renewable and non-renewable sources. In the future, there will be a continued movement towards renewable energy and  electric towel rails, like all electric heating syetems, will be able to take advantage of this when the time comes.

Browse our range of electric heaters today, and if you have any queries about which product is best suited to you, don't hesitate to visit our advice pages or contact one of our sales team.