As we leave cold temperatures behind and the nation eagerly awaits the opportunity to enjoy a drink in the sunshine once again, we decided to find out which UK city is the top destination for outdoor drinking.

To do so, we delved into the number of pubs with a beer garden in major UK cities and how they compared to population levels, as well as sourcing data on average spring temperatures, sunshine and rainfall levels in each region.

With British weather being notoriously unpredictable, we also looked into how many pubs offered outdoor heaters to keep their guests warm if the weather turns.

Which UK city is best for drinking outdoors? 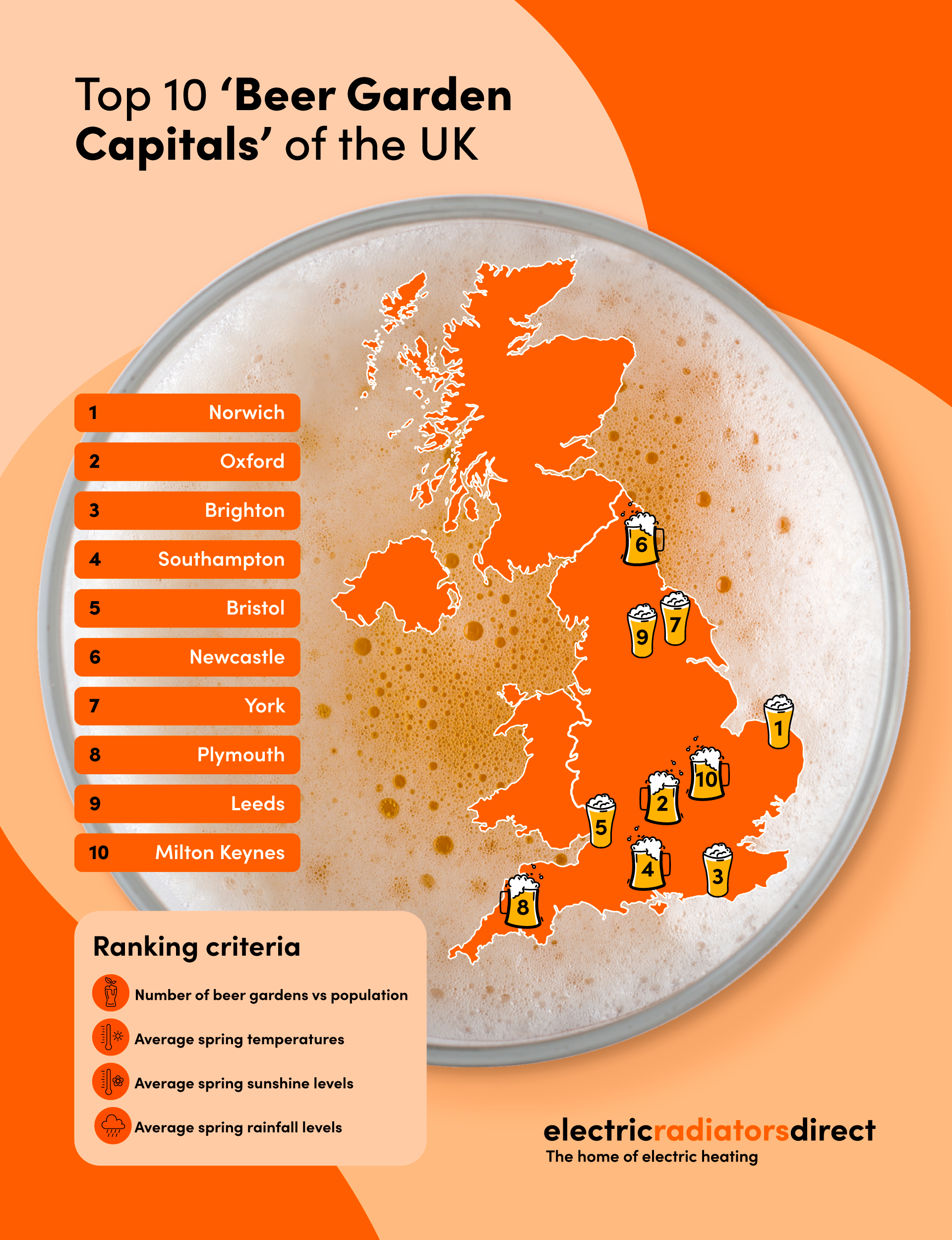 Norwich took the top position in our beer garden hotspots research, scoring 86 out of 100 possible, points thanks to its high ratio of beer gardens compared to the local population. The East of England also enjoys fairly mild spring temperatures (around 8 C° on average), a respectable number of sunny days and a reasonably dry climate.

Oxford and Brighton followed in close second and third in our table, scoring 83 and 81 points respectively.

Both cities also gained great scores thanks to the South East enjoying the highest average spring temperature in the country – 8.1 C° last year, almost one whole degree above the national average of 7.3 C° – as well as generally bright and dry days in spring.

Despite these cities ranking well for the ratio of their outdoor drinking space and their warmer temperatures, we all know the British weather can be notoriously fickle. But rest assured, the top three beer garden cities are well-equipped for temperature dips too.

According to analysis of Google Reviews, at least 17% of beer gardens in Norwich are equipped with outdoor heaters, while at least one in six (15%) of the beer gardens in Oxford and Brighton can be kept balmy even if the British weather takes a turn.

According to our research, Scottish cities are unfortunately not the best equipped for outdoor drinking, with Aberdeen, Glasgow, and Dundee coming in at the bottom of the ranking, scoring just 10, 12 and 21 points out of 100 respectively.

Understandably, all these cities have also got low scores due to the low average temperatures, lack of bright hours of sunshine and high rainfall levels recorded in Scotland in spring.

In fact, the average spring temperature across Scotland was 5.9 C° last year - almost two degrees below the national average of 7.3 C°.

Where are the cheapest cities to buy a pint in the UK?

During a sunny spell, regular trips to your local beer garden can quickly mount in cost. According to our data, it’s the rainier, colder parts of the UK that offer the best value for money in terms of pints.

If you can bear the colder temperatures and higher chance of rain, Aberdeen and Dundee are the top choices when it comes to cheap drinks, with an average pint in either city costing just £3.

But for those looking to maximise sunshine and stretch their pennies, Milton Keynes and Leeds rank in both the top 10 cities for drinking outdoors, and for the cheapest pints. 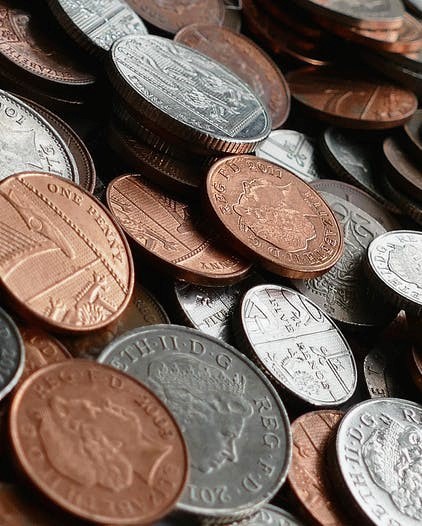 While Norwich might give you the best chance of a seat outside and warmer temperatures to boot, the sunshine comes at a price. The city is the third most expensive on the list when it comes to buying a pint, averaging £4.35.

Unfortunately, the other contenders for the UK’s Beer Garden Capital also come with a high price tag. On average, a pint in Brighton will set you back £5, while a pint in Oxford will cost you £4.25. Bristol ranks fifth both for best beer gardens, and for most expensive pints.

Top 5 UK cities with the most expensive pints 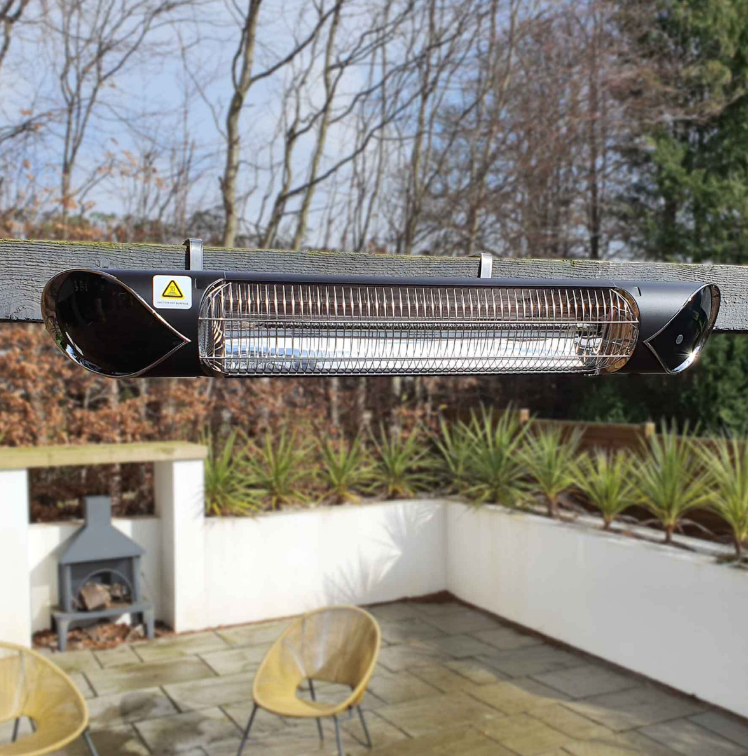 British weather can sometimes be unpredictable, and evenings can get chilly even after a sunny day. It's important to be able to have a comfortable outdoor experience even when temperatures drop, which is why electric patio heaters can be a great added value to a beer garden, that many will be looking for when making a choice.

Electric patio heaters are an easy and energy efficient way to ensure you can stay warm while socialising outdoors year-round, both at your favourite beer garden and at home. They use effective radiant heat to combat the cold and aren’t affected by the breeze, so all the heat goes directly to you.

If you’re considering investing, this handy guide to the best electric patio heaters in 2022 will help you decide on the best one for your needs.

We looked at Google Reviews to find the number of pubs with outdoor heaters, the data for which is accurate as of 30th March 2022.

To find the average cost of a pint in each city, we used Numbeo – the data for which is accurate as of 4th April 2022.

1With the exception of London, for which we counted pubs with beer gardens within a 10-mile radius from the city centre.