It’s easy to take heating for granted in the developed world. We rarely give it a second thought unless we have to go without it, and at times we can forget just how lucky we are to have our own dedicated source of home heating. Why not spare a thought for all the enterprising individuals throughout history who strove to provide us with these modern conveniences we would struggle to live without? In the 19th century, engineers and inventors were fascinated by electricity and could see that it had far reaching potential to change our lives for the better. One of the many applications they foresaw for electricity was to provide convenient and reliable heat for the home. It’s from these humble beginnings that modern electric heaters were conceived.

The dawn of a new era 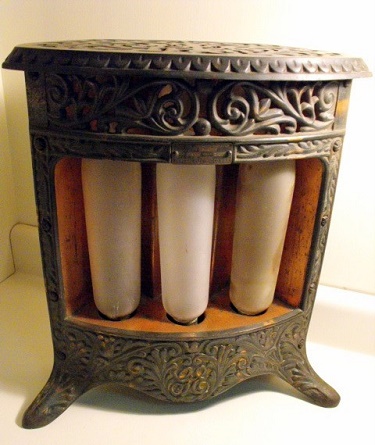 Attributing the birth of the electric heater has proven to be an impossible task for historians as its invention is the culmination of research from more than one source. As the earliest electric heaters used bulbs, part of the credit is given to Thomas Edison who patented the lightbulb in 1880. However, as electric heaters also needed a durable, high-resistance wire in order to work, proper dues are also given to Albert Leroy Marsh who developed the alloy ‘chromel’ in 1905. Chromel, or nichrome as it is now known, was over 300 times stronger than other available alloys at the time and revolutionised electrical engineering. The high 1,400 °C heating point of nichrome and its corrosion-resistant properties mean that it’s still widely used even today.

Some of the earliest heaters were created by American company General Electric in the early 1890’s. It’s somewhat unsurprising that these first heaters used elongated glass bulbs to output heat as General Electric was created from an amalgam of two companies, one of which was headed up by Thomas Edison himself. 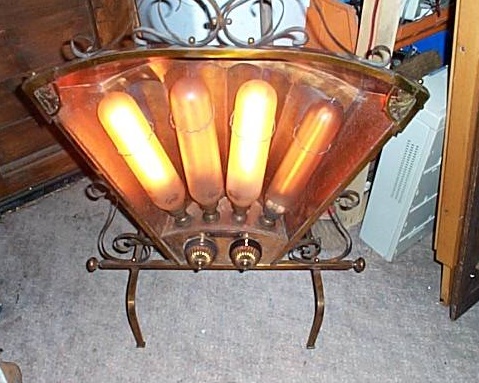 Across the pond in 1891, renowned engineer Herbert John Dowsing had demonstrated an all-electric cooking method at the Crystal Palace Electrical Exhibition.

During this period, his business Dowsing Radiant Heat Company was also producing some of the earliest electric heaters using similar long cylindrical bulbs. Though rudimentary in design, these are some of the first products which look recognisably like a heater and often had copper backing to help radiate the heat outwards into the room. H. J. Dowsing can be credited for giving electric heating domestic application within the UK, but he was also a prolific engineer in many other fields, particularly the automotive industry. He’s perhaps best known for fitting an Arnold motorcar with the world’s first self-starter – a dynamotor coupled to the flywheel to assist in starting the engine. In his obituary, it’s also noted that he used his knowledge to create

“radiant-heat applications for the alleviation of rheumatism and kindred complaints. During the War this treatment was adopted by the Government for use in over 100 war hospitals.” 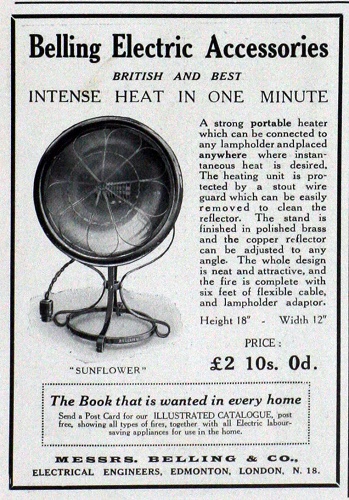 The turn of the century saw other British innovations in the field of electric heating and the beginnings of portable technologies. In 1912, Charles Reginald Belling set up his own business out of his shed in Enfield manufacturing electric heaters. Early models of these heaters looked like table lamps with a copper reflective dish at the back to project heat out into the room. Belling & Co would go on to see roaring success with their business and are still a major brand within British electricals.

Electric Heating through the early 1900s

The post-World War II economic boom and surge in consumerism saw electrical appliances proliferate in the home. Electric radiators began to see widespread adoption and by this point portable oil-filled models were also available. One of the most iconic electric heating appliances to come out of this era is the electric fire or ‘bar heater’, a wonderfully nostalgic piece of kit that you may have grown up with, or still have somewhere in your house.

Widespread use and early safety issues 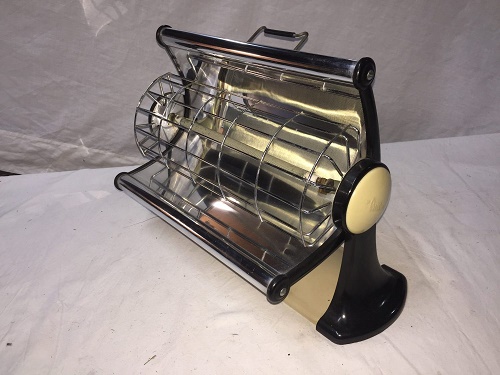 These heaters get their name from the bars of coiled wire that are used as heating elements within the body of the product. When in use, these bars give off a bright orange glow and soothing radiant heat. Radiant bar fires became a popular heating choice from the 1950s onwards because most models were portable and could be plugged in anywhere in the home. Their strong radiant heat was almost instantaneous and had none of the dangers associated with burning carbon-based fuels. This didn’t mean they were completely safe though! Early bar heaters were notorious for having inadequate guards around the hot elements and many inquisitive fingers came a cropper against its searing temperatures. Fires could be easily started if the heaters were knocked over or if clothes were draped over the grilles to dry, but as time went on people became more educated about electrical safety.

Though not terribly efficient, the bar heater’s popularity lasted for years due to its versatility and simple plug-in-and-go design. In the 1950s, Belling & Co were seeing a big expansion in their company and were producing numerous models of electric bar heaters for domestic use. Though they might seem a little old fashioned by modern standards, contemporary bar heaters are still being manufactured, although with much higher safety standards. This principle of using wire elements to create radiant heat has been greatly refined over the years and forms the basis of many current energy-efficient infrared heaters made today.

Demands in energy from the 1960’s and beyond 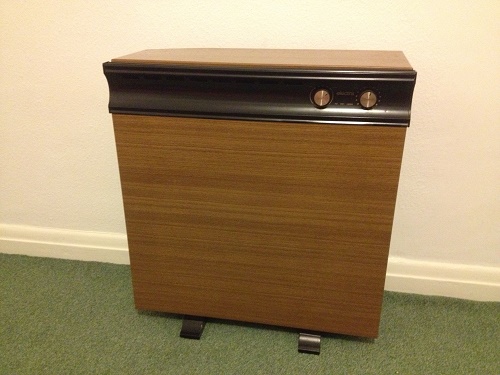 As electric heating became increasingly popular, the Electricity Boards in the UK were presented with a bit of a problem. Usage of electricity soared during the day but took a severe decline at night, and as power stations couldn’t be powered down, they had to create some way of creating demand during this timeframe. To solve this issue in a way that was beneficial for everyone, domestic storage heaters were developed in the early 1960s and provided a way for people to heat their homes cheaply. Storage heaters worked by using electricity overnight to slowly heat up thermal bricks in the heater body. This heat could be released during the day as and when needed, then recharged overnight. These heaters worked in tandem with cheaper rates set by the Electricity Boards to make the use of surplus night-time electricity more attractive.

It’s a method that remained popular for many years, although domestic and global economic events eventually contributed to this system’s decline in use. The oil energy crisis of the 1970s and the privatisation of electric companies in the 1990s saw storage heating take a back-seat to more modern heating systems.

Over time the drawbacks of storage heaters became apparent. They relied heavily on users predicting their heating needs in advance because they could only be charged overnight in preparation for the coming day. If it was unexpectedly cold, it was possible to run out of heat by releasing it too quickly in an attempt to combat the lower temperatures. Though they were designed to be the economical choice, they didn’t provide energy-efficiency to match. In the end, modern electric radiators won out by providing greater management options, energy-efficient heating and quick, responsive warmth. Storage heaters still have loyal followers who swear by this heating method but sales have never matched the level of adoption seen in the 1960s.

Electric heating in the digital age 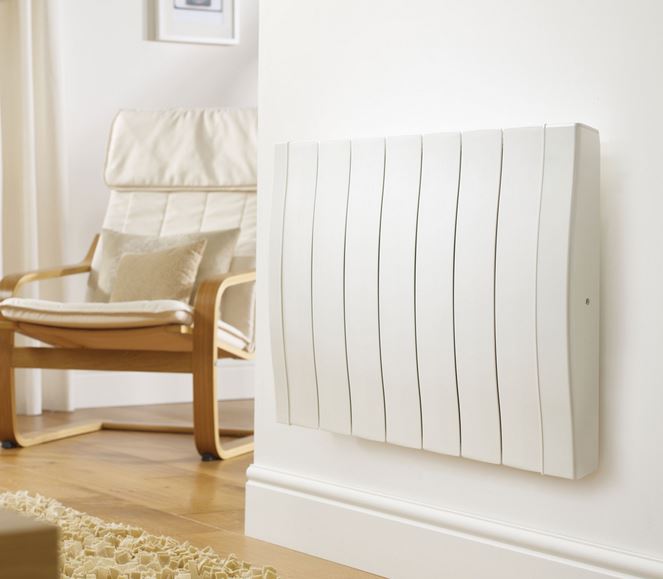 Toward the end of the 20th century, electric heating had come a long way. Improvements in the construction of electric heaters and radiators made them a much more efficient choice for home use. Greater understanding of heating elements has allowed modern electric heaters to be more responsive and a range of different electric heating methods have been developed since.

The birth of the digital age proved to be revolutionary for electrical appliances of all kinds, including heating systems. Computer chips allowed appliances to become much more sophisticated in how they were controlled: simple rocker switches and turn dials gave way to LED screens and digital programmers. Heating management options increased as digital keypads provided a means for users to input more precise and complex commands. This is evident in modern electric radiators like our Haverland RC Wave. Its digital controls give it a whole host of functions which weren’t available before the turn of the century. Users can create their own heating schedule on an hour-by-hour basis every day of the week, with all information stored in an integrated memory bank to protect your programming in the event of a power cut.

In recent years, there has been a much greater emphasis on energy-efficiency, especially as we’re becoming more conscious of how we use fossil fuels to create our electricity. When compared against electric heaters from 50 or 60 years ago, modern heaters provide a whole host of features that make them much more energy-efficient and controllable.

Next gen-tech for the modern world 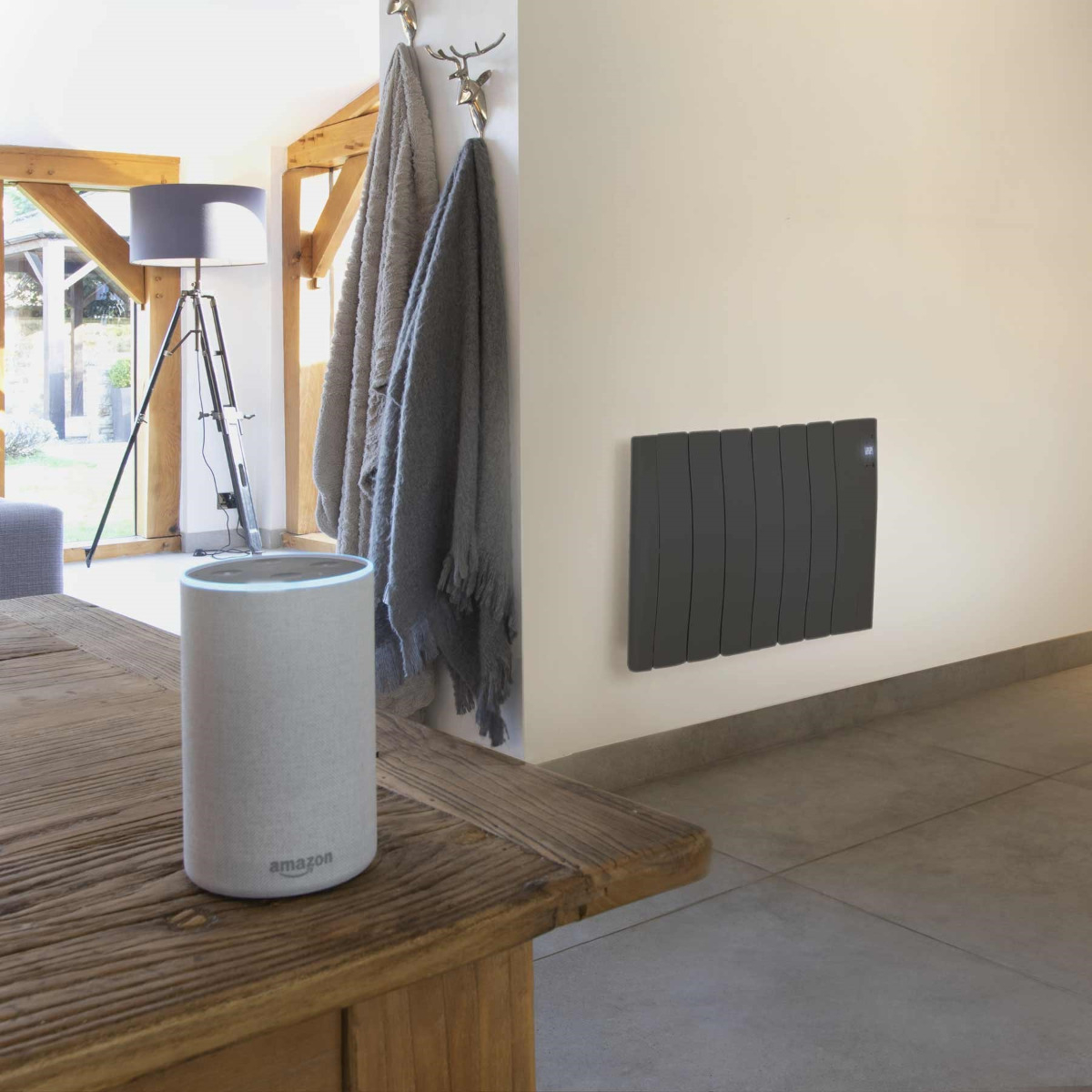 This trend towards highly controllable technology has advanced so quickly that it can be hard to keep up with all of the new innovations being created. Post-noughties heating systems saw the increased adoption of ‘smart technology’ across the board, be it in the form of smart meters, Wi-Fi controlled heaters or internet enabled thermostats. With the proliferation of smartphones and other internet connected devices, electric heating has benefited enormously by providing users with a point of contact that they can access from anywhere in the world.

Our Haverland SmartWave is an excellent example of the current flow towards smart technology. New electrical features incorporated into this model include highly advanced occupancy sensors which can detect movement in the room, and self-learning technology that effectively allows the radiator to programme itself around your daily routine. Using its sensors, the SmartWave will track your daily routine over the course of a week and create a heating schedule based on your regular habits. Inventions like these reduce the number of menial tasks for the user, such as manual programming and adjustment, but without compromising on control. The SmartWave can also be Wi-Fi enabled so that users can adjust their heating using an app on their phone or tablet, wherever they have internet access. These modern developments even allow your heating to adapt to changes in your routine. Don’t worry about wasting energy if you arrive home late, your radiator will switch off after 30 minutes of detecting no movement in the vicinity.

How would pioneering electrical engineers of the 1800s have reacted to these advancements, I wonder? We’ll never know, although it’s easy to imagine that they would be blown away by how far their chosen branch of science had come in such a short space of time. It could be argued that electric heating is still relatively in its infancy when you take into account that it only saw true widespread adoption in the mid-1900s, so it will be interesting to see where future developments take us. Voice command controls are currently on the rise so how long will it be before we’re talking to our heaters, joking with them or even helping them through their own existential crises? Only time will tell...