We’re all constantly being told to save energy to save the planet, but does pulling the plug on your electric appliances and installing draught proofing really make a difference to the environment? After all, a TV on standby or leaving the mobile on charge overnight only uses a tiny bit of electricity and doesn’t cost that much. When it comes to heating, the efficiency of any system depends on how you operate your heating, and also how well insulated your rooms are – but does it do much harm if some of that heat is lost through windows and walls? This winter we’ve all enjoyed lower heating bills with the warmest December since 1934. However, warmer air holds more moisture and rainstorms and floods have been battering the UK.

So what has the weather got to do with saving electricity? Possibly quite a lot – scientists are agreeing that the weather we’ve been seeing is very likely a result of a world that has warmed up, and that higher temperatures in the atmosphere are linked to the pollutants emitted through our energy usage.

Where does electricity come from? 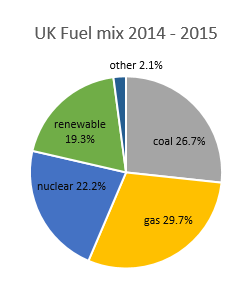 In considering how all the electricity we use impacts the environment we first have to look at where it comes from. Traditional forms of fuel used to generate the electricity we are so dependent on cause pollution – mostly in the form of carbon dioxide, a gas that has increased in concentration so much that is has caused our atmosphere to heat up. In the UK most of our electricity is generated at power plants from a range of different fuels and the chart below shows the fuel mix that produces our power.

A large proportion of the electricity we generate - 60% - relies on imported fuel. A recent report by Good Energy found this fuel travels on average 2650 miles to get to us. We buy coal from Russia for fossil fuel stations, uranium for nuclear power from Kazakhstan, pipe gas for gas turbine power stations from Norway and biofuels form the US and Canada. This transportation of fuel also uses energy. The origin of the electricity you pay for will depend on the energy mix used by your energy supplier. For most suppliers in the UK the largest proportion will come from fossil fuels (gas and coal) and nuclear. There are currently a few suppliers who source all or most of their electricity from renewable generation – which includes wind, solar power and biomass – sources producing significantly less pollution but not without controversy. Whatever your electricity is generated from, there will be some environmental impact, so whenever you power up your PC or turn an electric heater on, you’re affecting the environment.

What environmental impact does generating electricity have?

In total over 32% of greenhouse gas emissions in the UK come from the energy sector. The environmental impacts of the fuels that produce our power are as follows:

Coal: Electricity generation from coal leads to significant emissions of the carbon dioxide that contributes to global warming. Also other air pollutants are emitted in particular nitrogen dioxide which can contribute to lung conditions like asthma and heart disease. Coal is burnt much more efficiently and cleanly than in the days of pea soup smog, but it’s still one of our major contributors to climate change.

Gas: Like coal, natural gas is a fossil fuel. When burned as fuel in a modern power station it emits 50 to 60% less carbon dioxide than coal. However, the drilling, extraction and transportation of natural gas results in leakage of methane – which is a more potent greenhouse gas than carbon dioxide. Gas extraction sites also have an impact on land and wildlife.

Nuclear: Once up and running safely nuclear power plant have little impact other than on the landscape. Any leaks or accidents at nuclear power plant, although rare, can result in far reaching and potentially catastrophic long term damage to land, wildlife and people across vast areas. Also, nuclear waste is radioactive, taking many years to become safe.

Wind: Wind turbines are disliked by some for their impact on the landscape, while others love them. While they don’t cause any atmospheric pollution, in some situations they can create noise problems for nearby residents, and collision incidents for birdlife and bats. The construction of offshore wind farms can have a noise impact affecting marine life as they are being assembled. However once in place, the structures attract marine life by creating an artificial reef.

Solar: The manufacture of the photovoltaic cells used in solar panels involves some toxic components which need careful handling to avoid pollution. Large solar arrays on land can also have a significant visual impact, and use up a lot of land.

So what can an individual do to reduce emissions?

The sources of the electricity we take for granted are diverse, and all have an impact of some sort. Here are some numbers on the kind of pollution we each produce:

- When we use electricity around 0.490 kg of carbon dioxide is emitted per KWh.

- Every time you boil a kettle you produce 0.015 kg carbon dioxide

- If you leave your wireless router on, you are likely to be using 0.24kWh per day and 87.6kWh emitting 48kg of CO2. Over the whole of the UK, this would equate to £150 million of electricity annually. (Ethical Consumer)

So, if individuals take small actions, like turning off appliances on standby or not being used, the cumulative effect on reducing electricity usage can be huge. Similarly, making heating more efficient by insulating and draught proofing homes can make a difference to the environment as well as your bills. And finally, looking at your how your energy supplier sources electricity and choosing a supplier who favours renewable generation, you can further reduce the impact your use of technology, gadgets, heating and other essentials to our way of life have on the environment.