Since the 1980s, towel rails have been increasing in popularity. Today, heated towel rails have become synonymous with contemporary bathroom design to the point where they are seen as a necessity. There are two main types of towel rail available: central heating towel rails, which plumb into existing central heating systems, and electric towel rails, which hardwire into the mains and work entirely independently. Electric variants have many benefits over their centrally heated counterparts that may not be common knowledge. So what could be the advantages of having an electrical towel rail in your home? 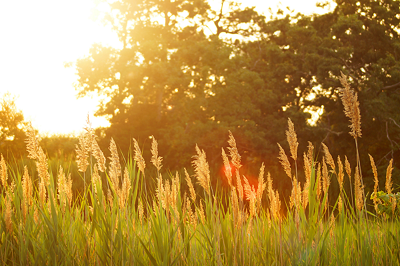 Regardless of the weather outside, it’s never pleasant getting out of the shower and being consumed by cold air. Towel rails therefore are a must for any contemporary bathroom. Unlike radiators in the rest of the house, people tend to want to keep towel rails on in the summer. Yet, this may cause issue if they are run via central heating. Generally, a gas circuit will have more than just a towel rail connected to it. This means turning on the towel rail will also turn on the rest of your centrally heated radiators. All that generated heat is not needed in the summer and would be uncomfortable and wasteful. Luckily, there is a solution; electric towel rails. Electric towel warmers can easily be turned on separately, because they are not connected to the rest of your radiators. This also means you can control the heating in different bathrooms separately. For example, you may want the towel rail on in the main family bathroom, but not in the en suite of your guest bedrooms. Since both towel rails are on different circuits this is entirely possible. This is therefore a great deal more intuitive than centrally heated rails and allows you to have more control of heating throughout your home. 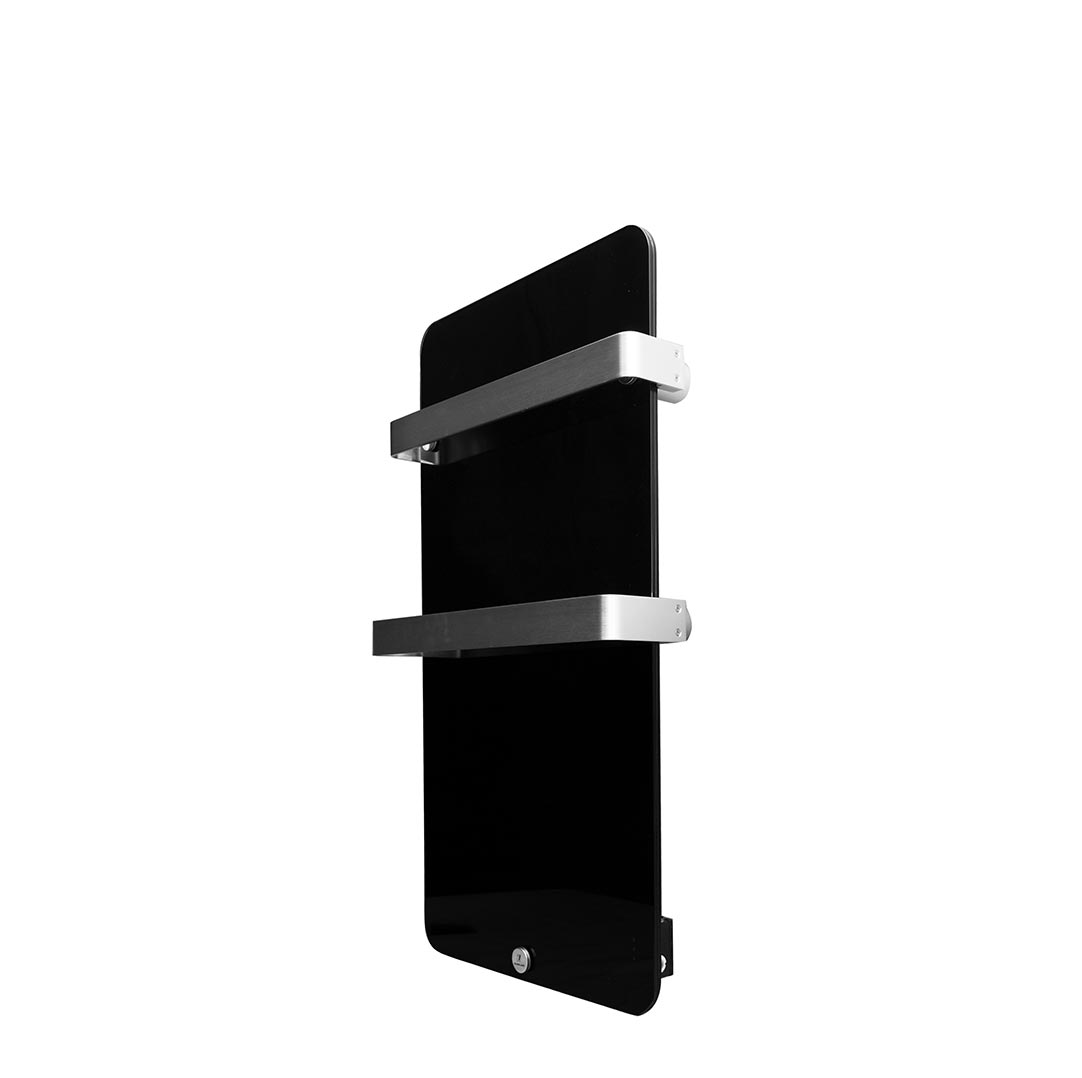 Towel rails run by central heating are notoriously less precise when it comes to exact temperatures set on a thermostat. A towel rail heated via the central heating may fluctuate between two to three degrees. This is because central heating systems are controlled by a single, central thermostat, and the temperature of the water in your system is controlled by the boiler, rather than by the towel rail itself. Electric towel radiators, by comparison, are much more efficient and controllable, because they are each controlled by their own, highly accurate digital thermostat. When the temperature needs topping up, they use their own electric heating elements to begin the heating process immediately. A fine example of one of these rails would be the Ecostrad Magnum which uses heated panels of tempered safety glass as well as a remote digital programmer and integrated thermostat which intelligently maintains surface temperature as well as creating a bespoke heating regime. 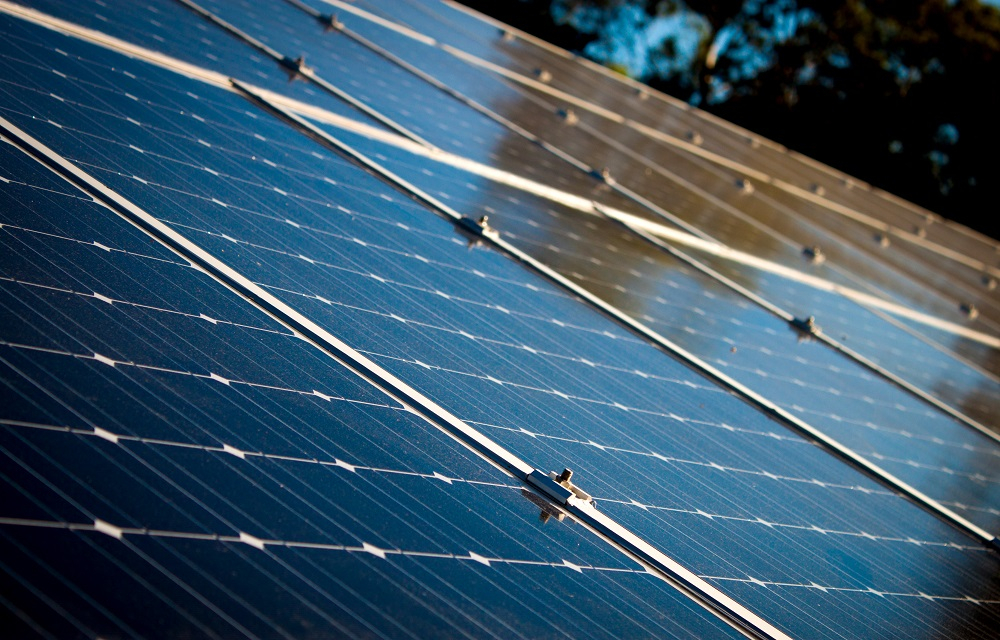 More and more people in the UK are becoming increasingly wary of their carbon foot print. More specifically, how they can reduce it in their day to day life. A centrally heated house relies on the supply of gas to your boiler, which burns the gas to heat up your water supply. As anyone who understands the environment will know, using gas uses up fossil fuels which are becoming an increasingly finite resource in this day and age. As well as this, combustion in the boiler where the gas is burnt releases carbon dioxide which is a contributor to the greenhouse effect and subsequent global warming. However, electric towel rails provide the opportunity to enjoy the same level of heating in your bathrooms, without damaging the environment.

At the moment in the UK, electricity is being generated by a plethora of sources: the majority based on fossil fuels, but an increasing number from renewable sources. This includes wind farms, tidal/hydro-electric plants and solar panels to name a few. Solar panels have been installed on many properties in the UK and the government say 10 million homes will have the renewable energy source fitted by 2020. This means that it is entirely possible that you could power your electricity supply by renewable and sustainable means. Accordingly, choosing electric heating sources, such as towel rails and using them in connection with solar panels would be the environmentally friendly choice that would reduce your carbon emissions and potentially a long-term money-saver. 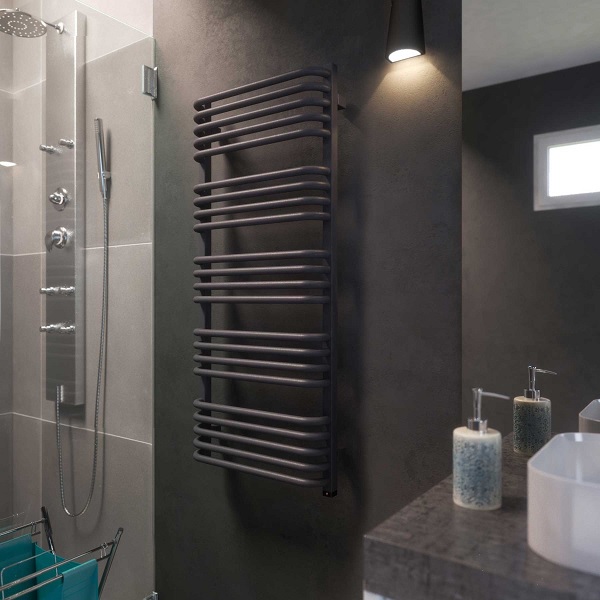 In order for a centrally heated towel warmer to work, you must have fuel-burning boiler to combust your power supply – usually gas. As in all combustion processes, some energy is lost. This is generally around ten to twenty percent of overall input and is lost by both radiation and convection to areas around the boiler and pipes. Yet, towel rails are powered directly by electricity and therefore are a great deal more efficient. So much so that they are regarded as being nearly 100% efficient as all the energy consumed by the electric towel radiator is converted into heat and transferred into the surrounding room.

Whilst centrally heated rails may take 20 minutes or more to heat up fully, an electrically heated towel rail with timer can generally reach its desired temperature in less than 5 minutes. This means that, by the time you’ve finished your shower, your towels are guaranteed to be warm. Thus, heated towel rails powered by electricity are more efficient as they are an ‘on demand’ heating system. This minimizes wastage as you turn on the rail when you need it and off when you do not.

Bathroom interior design is more popular today than it’s ever been, with thousands of options available to turn your wash space into the room of your dreams. But whilst picking tile designs, colour schemes and bathrooms fixtures is arguably more exciting, it’s important not to neglect your bathroom heating, because making the right choice can save you money – and guarantee that your towels are always warm and dry when you need them! Browse the full range of our electric towel radiators today.