Is an unsightly cloud of black spots manifesting itself around your bathroom windows or ceiling? Has your wallpaper begun to peel, wilting as though it has lost the will to live? It may be that brownish or yellowish stains are growing above your skirting board? If any of this this rings true, it seems that your bathroom has been invaded by damp. Fear not, whilst it may currently be winning the battle, it has not yet won the war...

Depending on your home environment, you may be faced with one of three damp manifestations: condensation, penetrating damp, or rising damp. If left untreated, damp can attack the very structure of your house, causing a slow deterioration that could result in a costly fix -  ultimately putting a dampener on your day.

Unsatisfied with simply feeding on housing structures, damp also preys on humans, releasing allergens and toxic substances that can have detrimental effects upon the immune system – particularly for babies, children and the elderly. Damp can also have a negative impact on those with existing skin or respiratory problems such as eczema, allergies or asthma.

Types of damp and possible solutions

The most common type of damp to find in bathrooms is condensation. This is mainly, but not exclusively, a winter problem due to the bathroom walls being colder than the air inside. When moisture comes into contact with a colder surface, e.g. a wall, window or mirror, the air is unable to withhold the moisture and consequently tiny drops of water appear.

This commonly occurs in places where the air is still, ventilation is minimal, and the damp is hard to reach. Damp can appear in high corners or behind pieces of furniture such as cupboards or towel rails. Clear signs of damp condensation include the formation of water pools underneath windows, droplets on the windows, dark mould around the window potentially accompanied by an unpleasant smell, and widespread damp or mould on upper walls and ceilings.

Your first move in the war against damp should always be to give your bathroom windows some care and attention. As the coldest part of your room, your windows are usually the key culprit in attracting the wrath of damp. With a simple and proactive strategy however, this tyranny can be turned on its head. Send a strong message to the damp in your bathroom by wiping your windows and sills every morning and then wringing the cloth prior to leaving it to dry on your radiator or towel rail.

Leaving the window ajar can transform your windows from an Achilles heel into a formidable ally. Ventilation is the key. If you have an extractor fan leave this on as much as possible. Remember if you have the curtain or blind drawn it makes the window cooler, especially if single glazed. The incorporation of a trickle ventilator or double glazing can also have a strong positive influence.

Whilst looking after your windows is a great deterrent for damp, you’ll also need a quick fix to remove any existing mould. Once damp has started to make itself at home in your bathroom, it’s time to go in spray guns blazing and get your fungicidal wash out. If damp has eaten away at a significant portion of your bathroom already, then it may be a good idea to redecorate with fungicidal paint – although remember that fungicidal paint is not as effective when overlaid with normal paint. If you prefer to wallpaper, we recommend using fungicidal paste. The fungicidal based solutions are rapid fixes to the damp but not long term deterrents so a combination of the methods given will likely give you optimal results. 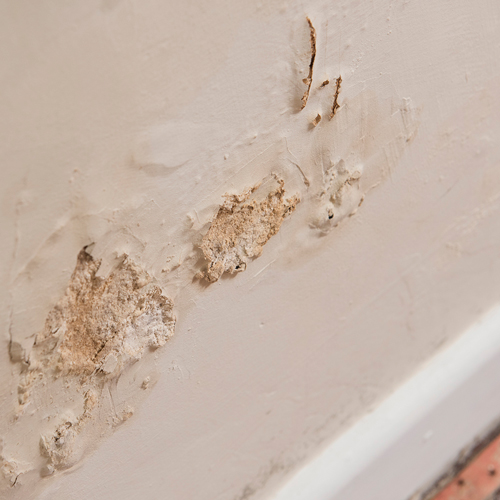 Indiscriminately seeping through at any point in the wall, water is unrelenting and determined in this manifestation of damp. Penetrating damp is common in solid wall construction, where the smallest cracks and joints can leave your bathroom vulnerable to a siege of damp. Generally caused by aging brick or building defects such as defective guttering, roof damage or poorly installed windows, this variant of damp often takes weeks or months to disappear.

The first point of attack is to locate the entry point of penetrating damp and eliminate the moisture at its source. This can be done by recognising the defect, allowing the damp to penetrate, and subsequently repairing it; this may mean that your windows need a reseal or some missing mortar between your bricks needs patching. Once the moisture has been eliminated at the source, it is critical to ventilate. Ventilation is critical to keeping damp at bay – and remember, prevention is always easier and cheaper than a cure. 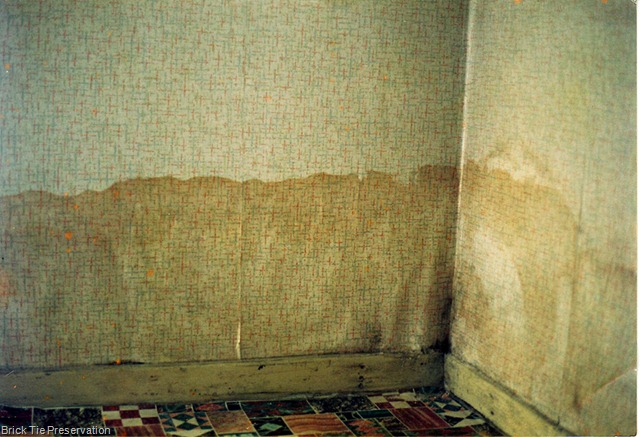 Rising damp is easier to recognise and locate because most of the action develops below floor level. If your skirting boards are growing disconcerting coloured patches, or brownish tide marks have formed up to 1 metre above the skirting board, it is likely that these will soon start smelling – if they don’t already! What you are seeing is water and salts soaking and evaporating up from the ground. Showing no mercy, the salts may manifest themselves in the form of fluffy deposits washed out of the bricks and into the plaster leaving your wall battered and bruised. Your skirting board is often a tell-tale sign of rising damp: watch out for cracked skirting, growing fungus, flaky paint and peeling wallpaper.

Rising damp only occurs on ground floor levels; if your damp is on the first floor or above it is condensation or penetrating damp. Most floors and walls generally permit some water entry – however, damage is generally prevented by a barrier called a damp-proof course or a damp-proof membrane. Rising damp predominantly occurs in older houses as regulations regarding damp-proof courses and membranes only became compulsory in 1875. If your house has been built post 1875 and you are experiencing rising damp, it is likely that you are one of the lucky few that has a damaged damp-proof membrane that has been damaged.

If you have read this and come to the realisation that you have the curse of rising damp – fear not, there is a cure. Whilst this is arguably the trickiest and most expensive type of damp to fix, if you procrastinate and throw the issue to the side then it will continue to grow and manifest itself simply growing more and more powerful and thereby more expensive. Check your floor for damp-proof course and damp-proof membrane. If either and or both of these are missing then calling a specialist is recommended. The specialist will likely drill holes into your infected wall and inject damp proof cream to act as a course. If your floor is suffering from the dreaded damp, a quick fix could be to use fungicidal paint and for added protection add reflective foil building paper (foil side up) before it has totally dried. For a quick understanding regarding the costs of dealing with damp, which.com offers a useful comparison tool.

Using your heating to prevent damp

As has been well established, prevention is always cheaper and easier than a cure, as far as damp is concerned. Whilst good ventilation is one of the most important preparatory steps you can take, it’s equally important to ensure your rooms are adequately heated. One of the best ways to do this in your bathroom is with an electric towel rail. A good towel rail fights damp at two levels: warming the room, which makes the walls and ceiling less hospitable to damp, and drying your towels, ridding the room of unnecessary moisture held in festering soggy towels. Electric towel rails provide a particularly economic damp-fighting heating strategy for bathrooms because they operate separately from your central heating, so you can keep them running throughout the summer without switching on your entire heating system. Towel rails are excellent bathroom heaters, however, it's best to check your product's IP rating before getting it installed by an electrician to ensure it's safe to use in bathrooms. We also don't recommend installing an electric radiator or panel heater in a bathroom - as the temptation to cover them with damp towels can cause electrical hazards.

Once your bathroom has suffered irreparable damage from damp, there is finally no alternative but to get in touch with your local damp specialist and prepare for radical action. If that sounds like your bathroom, don’t delay! Acting now will preserve the value of your home, create a healthier environment for you and your family, and make your bathroom a much more beautiful place to be...