The energy mix in the UK has had a bumpy ride over the past few decades but where we’re currently sourcing our energy is now the centre of a much heated public and political debate.  Environmental issues have been the long standing concern, with energy bill increases fanning the flames in 2013.  But did you know the UK uses less energy now than it did in 1970?

Since 1970, an additional 6.5 million people now live in the UK due to population growth and immigration.  Surprising then, that we use less energy now that we did 50 years ago, but there is  a very reasonable explanation.  Nowadays, we’re simply a lot more efficient in the way we produce energy and the way we use it.  We’re now entering a less intensive energy generation than that of the aftermath of the industrial revolution, and this, coupled with new energy efficient technologies, has also helped to reduce our national consumption.

Households are reported to be using around 15% less than they did 50 years ago, with the industry sector using a staggering 60% less.  However, the road industry spoils the numbers by using 50% more than it once did, and with an extra 17 million cars on the road there’s no mystery there.  But the Department of Energy and Climate Change have recently released a report which forecasts a continued trend of energy efficiency, offsetting population growth.  The bottom line of this report is that we’ll pretty much be using the same level of energy in 2030 as we are today, as improvements in technology reduce the demand for energy.  This however, isn’t where the problem lies.  The main problem isn’t necessarily how much energy we’re using, it’s where and how our energy is sourced.  It’s all to do with electricity. 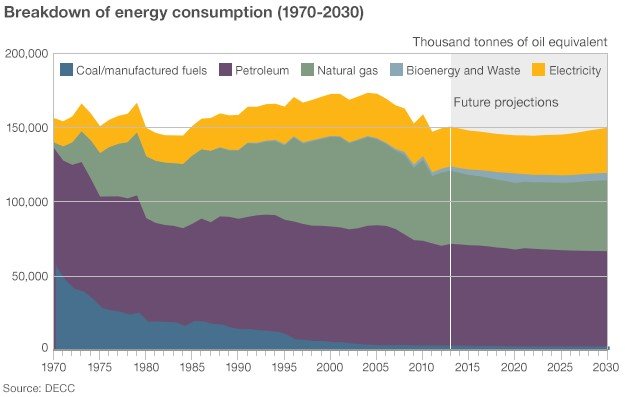 Back in 1970, around two thirds of the UK’s electricity was generated from coal.  In 2012, less than half came from coal. The DECC seems to believe that renewables (and eventually nuclear) are going to pick up where coal leaves off and that this is already in motion.  So while we may still be using the same level of energy in 2030, the ways in which we generate it will have changed massively, hopefully leading to a less polluted environment and much cheaper (and more stable) supplies.  At the moment we’re all naturally trying to scramble for ways to save energy and make our homes more energy efficient, which is certainly a positive step and a good way to save pennies as well as preserve the environment, but the root of this ever increasing problem lies in how we will source our energy long term - something we need to take the wheel on very, very soon.