A six day call for action and civil disobedience which was set up by the anti-fracking group No Dash for Cash was halted yesterday, but the group has vowed to continue its fight against the process, which they say can cause environmental damage and will halt the governments use of renewable energy.

The Reclaim the Power camp which was set up in Balcombe, West Sussex was the scene of much of the action and saw the Green MP Caroline Lucas arrested by police. She was one of nine others who were arrested and will appear in court next month. However, the action was a success, as the company behind the drilling suspended its work during the protest, however it is thought that they will resume this week.

No Dash For Cash have said on their website that they see their action against the process of fracking, which uses high pressure jets of water and chemicals to break apart deposits of gas deep in the ground, as a marathon rather than a sprint and that they will continue the fight against it (and the wider issue of the use of gas) both in Balcombe and elsewhere.

Meanwhile the Reclaim the Power camp set up for the duration of the six days protest has been dismantled, but there will continue to be a presence of protesters outside the main drilling site. However, there have been discussions about how to maintain the protest camp for a longer period of time. 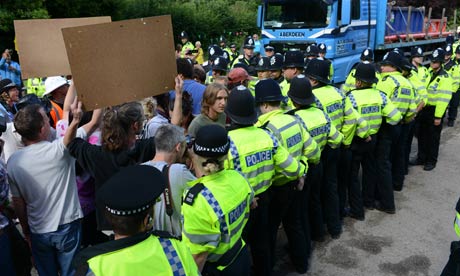 The main concern of the group is that the process of fracturing or “fracking” the ground could lead to water contamination and could trigger earthquakes. However, and perhaps more importantly, the fact that the government is leading the charge for gas means that the use and promotion of renewables is becoming less of a priority for them.

For those people who want to use electric as their main source of energy because it is cleaner than gas, this charge towards fracking is dismaying. The government has committed to a huge reduction in emissions as part of the EU by 2030 and the use of gas for energy seems to fly in the face of this. It seems impossible that such reductions could be made without a concentrated effort to introduce more renewable energy sources.

In terms of energy costs, many hope that fracking could lead to a drop in energy prices. This has happened in the US where there have been huge falls in the cost of gas. However here in the UK where the gas infrastructure is quite different, it has been stated by energy companies, the drilling company Cuadrilla and Ofgem that fracking will be unlikely to reduce energy prices, although it could reduce the increase in costs over time.

However, it is certainly worth pointing out that if gas was to replace coal as the primary source of power for electricity power stations, the net result could be a drop in emissions.

The fact is that protesting is likely to continue and that few people in the UK would like to see gas exploration taking place in their village. After all, we do not have the same expanse of land which the US boasts, and it seems the long term welfare of our company is on the line over a myth surrounding reduced energy bills.