Today it was announced that five offshore wind farms and three biomass plants in the UK would receive Government funding. Collectively the eight developments could provide millions of homes with clean energy, but there is a worry they could lead to a short term increase in energy bills. Should we be celebrating or should we really be concerned...?

The UK Government have agreed deals to financially support the developments which are being marketed as an excellent step forward in the pursuit of a greener Britain.  The projects will create around 8,500 jobs and add a healthy 4.5 Gigawatts of electrical capactiy to the National Grid - around a 4% boost or enough to power 3 million homes. 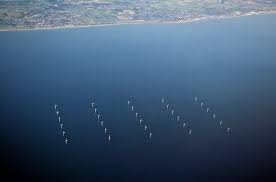 The Government has announced that these projects were worth up to £12 billion in private sector investment.  This is good news both for the economy and for our energy infrastructure, and answers the criticisms of many academics and industry leaders that the UK has a capacity problem. It's great to see progress, but naturally there are detractors who see through the rose tinted plans...

One of the main crticisms of the move is the affect it could have on consumer bills, with Energy Secretary Ed Davey openly conceding on BBC News that the projects will add around 2% onto the average household bill. This is sensitive issue lately and any increase in consumer bills will have to be carefully considered and spun in the right way. Davey knows this and followed up his statement by saying that the benefits will hugely outweigh the cost, and that he still expects consumer bills to fall overall in the coming months and years.

Another downside to the developments is the focus on off shore wind farms rather than on-shore.  The Conservatives have already proposed a cap on the number of on-shore windfarms, a cheaper alternative to off-shore wind farming - a move which many disagree with.

Green groups have openly welcomed the move but have also used it further rally the Government to put even more emphasis on renewable energy and instill more clarity in the energy sector. The head of Friends of the Earth, Alasdair Cameron, also spoke out against the Government's "reckless pursuit of fracking", calling it a "dirty and unpopular" form of energy generation which has no longer term benefits.

Why not follow Eco Stores Direct on Twitter, Facebook or Google Plus? We aim to bring you the latest energy news, views and opinions every day. We are specialists in energy efficient heating technologies, offering a variety of heating solutions including pioneering far infrared heating panels and energy efficient electric radiators. Call 0333 920 0858 for more information.